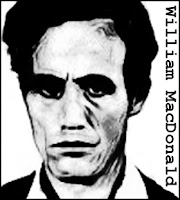 
Known as the “Mutilator” William MacDonald terrorized the Australian city of Sydney over a period of two years in the early sixties. In June 1961, a naked male corpse was found near of public swimming pool. The victim had been stabbed over 30 times and severely mutilated, with the genitals hacked off and apparently carried from the scene by the killer.

Two similar mutilation murders followed, throwing the city into a state of panic. Then the police received a complaint about a terrible smell coming from a small shop in the Sydney suburb of Burwood. Their investigation turned up a decomposed corpse, which they assumed to be the shop’s owner, William MacDonald. It wasn’t though, it was the fifth victim of the mutilator. MacDonald had killed the man and fled to New Zealand.

With the police certain that MacDonald was dead, he might well have escaped justice had he not returned to Australia. But he just could not help himself. After returning to Sydney, he was identified by a former work colleague who reported him to the police.

MacDonald fled again, this time to Melbourne. He was eventually arrested while working as a railway porter under an assumed name. MacDonald admitted to five murders. He was sentenced to life in prison.