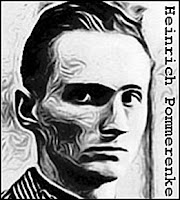 
Born in Mecklenburg, West Germany, Heinrich Pommerenke grew to be a handsome but inadequate young man who spent his youth trying to pick up girls at local dance halls. When they refused his rather crude advances, he followed them, knocked them down and tried to rape them. Eventually sought by police for these attacks, he fled to Switzerland in 1953, returning to Germany two years later.

Pommerenke committed a string of violent rapes in Hamburg between 1955 to 1959. Then, after watching the biblical epic “The Ten Commandments,” and being disgusted by scenes of women dancing around the golden calf, he decided that females were evil and started a campaign of murder against them.

Eighteen-year-old Hilde Knothe was raped in a local park that same day, her throat slashed with a razor. On June 1, 1959, Pommerenke attacked 21-year-old Dagmar Klimek on a train, then threw her from the moving conveyance. He then jumped from the train himself, found the injured woman and hacked her to death. A week later, he strangled 16-year-old Rita Waltersbacher, later committing necrophilia on her corpse.

While the German police hunted the “Beast of the Black Forest” Pommerenke continued his campaign of terror. He was eventually captured in June 1960, after he left a parcel containing a shotgun at a tailor's shop. The man called the police and Pommerenke was arrested when he came to collect his things.

Charged with ten murders, 20 rapes, and various other felonies, Pommerenke was sentenced to six life terms, amounting to a minimum 140 years behind bars.