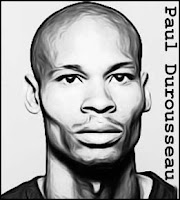 
On January 1, 2003, concerned family members of 19-year-old Nikia Kilpatrick arrived at her apartment to check on her. They had not heard from Nikia in several days and they soon discovered why. Her nude, decomposing body lay in the bedroom. She had been raped and strangled. Her two sons, aged eleven months and two years respectively, were alive but severely dehydrated and malnourished.

Just a week later, on January 9, 20-year-old nursing assistant Shawanda McCalister was raped and strangled in her Jacksonville apartment, the crime virtually identical to the Kilpatrick murder.

The next two victims, 17-year-old Jovanna Jefferson, and 19-year-old Surita Cohen, were found dumped in a construction ditch on New Kings Road in Jacksonville on February 5. But at least this time the police had a clue. Both of the women had been seen getting into a cab driven by a man named Paul Durousseau, a recent arrival in Jacksonville from Georgia.

Durousseau was brought in for questioning and initially denied knowing anything about the murdered women. However, after DNA evidence linked him to the crimes, he broke down and confessed. He also admitted to three more murders, Nicole Williams in 2001, Tyresa Mack in 1999, and Tracy Habersham in 1997, while he was serving in the US Army at Fort Benning.

Charged with five counts of murder Durousseau eventually went on trial in December 2007. He was found guilty and currently awaits execution on Death Row in Starke, Florida.