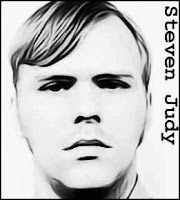 
However many murders Steven Judy committed (and there were at least eight, according to his confession), the incident that will always be associated with this heartless criminal was the atrocity he committed at White Lick Creek in 1979.

On April 28, 1979, a group of mushroom hunters found a woman's naked body floating in White Lick Creek, just outside Indianapolis. Further downstream, the bodies of three small children, two boys and a girl, were also found in the water. The woman had been raped and strangled. Her children had drowned after apparently being thrown into the creek. A bank book found at the scene identified the murdered woman as 20-year-old Terry Chasteen. That would make the children, Misty, 5, Stephen, 4, and Mark, just two years old.

As the police began investigating the atrocious crime, they got reports of a red-and-silver pickup truck, that had been spotted near the murder scene. The distinctive vehicle was soon traced to Steven Judy, a local bricklayer. Judy immediately confessed to the murders, saying that he had tricked Terry Chasteen into stopping her car at the side of the road. He had then offered to look under the hood and had deliberately disabled the vehicle. Then he’d offered to drive Terry and the children to their destination. Instead he drove them to White Lick Creek.

Judy sent the children to play and began raping Terry. When she started screaming, he strangled her. In an act of inhuman cruelty, he then threw the children one by one into the water, where they all drowned.

At his trial, Judy pleaded guilty and asked for the death penalty. “You’d better put me to death,” he said, “because next time it might be one of your daughters.” The jury was happy to oblige. Judy was sentenced to die in the electric chair.

Steven Judy was executed by electrocution on March 8, 1981. Few killers have been more deserving of that fate.