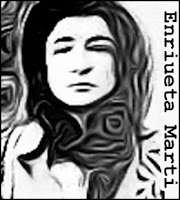 
A prolific child killer and reputed witch, Enriqueta Marti was born in 1868 in the village of Sant Feliu de Llobregat, Spain. As a young woman, she moved to Barcelona where she worked as a maid. However, she soon learned that there was much more money to be made as a prostitute.

Over the next two years Enriqueta saved up much of what she earned, then went into business for herself. Her establishment catered to rich pedophiles and she therefore needed child prostitutes. She solved this problem by wandering the streets dressed in rags an luring street children, who she forced into service in her brothel. If they were troublesome or outlived their usefulness, she murdered them.

Although she dressed as a beggar by day, Enriqueta spent her nights rubbing shoulders with  Barcelona’s elite in the city’s casinos and opera houses. This was necessary in order to recruit wealthy clients. Then, in 1909, it all came crashing down. Marti was arrested and charged with running a brothel, offering the services of children as young as three. Of course, Enriqueta held a trump card. Her clientele included the most powerful men in the city. She was released soon after.

Marti could not continue her brothel business but she came up with an even more monstrous way to make money. She began murdering children and using their body parts - fat, blood, hair, and bones - to make salves, ointments and potions. These were in great demand due to their perceived ability to treat tuberculosis and other deadly diseases. Marti’s wealthy clients were prepared to pay handsomely for her products.

No one knows how many children Enriqueta Marti murdered, but given that she operated her business over a span of ten years, the number may run to the hundreds. She was eventually arrested after police called at her apartment on February 27, 1912, in response to a domestic complaint. A search of the premises turned up an eviscerated child’s corpse as well as other human remains.

Marti was packed off to prison to await trial. But she would never see the inside of a courtroom. A year into her incarceration she was beaten to death by fellow inmates.