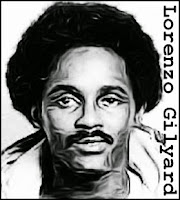 
A prolific strangler, Lorenzo Gilyard preyed on prostitutes in Kansas City, Missouri, claiming at least 13 victims over a murderous career that stretched from 1977 to 1993.

Gilyard was already a hardened criminal by the time he started killing. He had spent time in prison for child molestation and also for assault. In addition, he was the only a suspect in a series of five rapes committed between 1969 to 1974, although he was never convicted. Then on April 17, 1977, he graduated to murder, killing 17-year-old hooker Stacie Swofford.

The Swofford murder had already gone cold by the time Gilyard struck again on January 23, 1980, strangling 15-year-old prostitute Gwendolyn Kizine, 15. With this latest murder, the police picked up a pattern, one that they would see repeated over and over again in the years that followed. All of the victims were found without shoes, dumped in overgrown lots and abandoned buildings. Most had been gagged by having cloth or paper towels stuffed into their mouths.

The police knew they had a serial killer on their streets but despite their efforts, the Kansas City Strangler remained at large, claiming victim after victim. One woman was killed in 1982, three in 1986, five more in 1987. Gilyard then took a break from murder, returning in 1993 to claim one final victim. After that, he mysteriously stopped, something serial killers seldom do of their own volition.

The Kansas City Strangler case might well have gone unsolved. But in 2003, cold case detectives linked Gilyard’s DNA to the 1987 murder of Sheila Ingold. A crime lab later linked all 13 victims to the killer using DNA testing.

Gilyard was arrested in April 2004 and accepted a plea bargain in order to avoid the death penalty. He was sentenced to life in prison without parole.