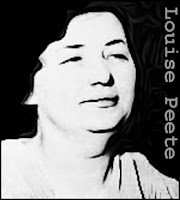 
Unlike most serial killers Louise Peete's came from a wealthy family and attended the best schools although she was later expelled for inappropriate behavior. In 1903, she married a traveling salesman named Henry Bosley, but he committed suicide after discovering Louise in bed with another man. She then moved to Boston, working for a time as a high-class hooker.

In 1912, she was in Waco, Texas, where she became involved with wealthy oil baron Joe Appel. After Appel was found murdered, with his jewelry missing, Peete was put on trial. She was acquitted after claiming self defense, saying Appel had tried to rape her. In 1913, she married hotel clerk, Harry Faurote. Like her previous husband, he committed suicide after finding her with another man.

In 1915, in Denver, she married salesman Richard Peete. They had a daughter before Louise abandoned her family and moved to Los Angeles. There, she moved in with Jacob C. Denton, another oil baron. Denton disappeared in 1920 and Peete returned to her husband in Denver. After Denton's body was found, Peete was charged with his murder, convicted and sentenced to life in prison.

Peete served 18 years before being released. Thereafter, she got a job as a housekeeper for a woman named Jessie Marcy, who died not long afterwards. An elderly co-worker also died under suspicious circumstances. Peete’s next employer was Emily Latham, who had helped to secure her parole. When Latham died soon after, her death was attributed to natural causes.

Peete then became a housekeeper to Arthur C. Logan and his wife Margaret in Pacific Palisades, California. Not long after, Margaret Logan disappeared and suspicion was aroused when it was discovered that Peete had forged her signature on a number of checks.

Tried and found guilty of Margaret Logan’s murder, Peete was sentenced to death. She was executed in the gas chamber at San Quentin on April 11, 1947.