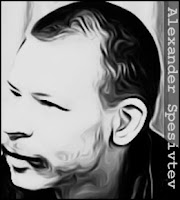 
Born in the Siberian town of Novokuznetsk in 1970, Alexander Spesivtsev  was raised in an abusive home. As an adult, he murdered his girlfriend and was sent to a psychiatric hospital, remaining there until 1991, when he was declared “cured” and released. He returned to Novokuznetsk, to share an apartment with his mother, Ludmilla.

In 1996, a water leakage in the Spesivtsev apartment resulted in neighbours calling a plumber. As no one was home, the plumber forced the door and entered. Moments later, he staggered out, screaming for someone to call the police.

Officers were soon on the scene. As they entered the apartment, they saw immediately what had so distressed the plumber. There was blood on the walls; bowls with pieces of human flesh in the kitchen; a mutilated, headless child’s corpse in the bathtub. On a bloodstained couch lay 15-year-old Olga Galtseva, severely mutilated but still alive. She was taken to a hospital, where she died seventeen hours later. Before that, she was able to tell investigators what had happened.

Spesivtsev's mother had lured Olga and two friends to the apartment. Once inside Spesivtsev had attacked the girls, using his fierce Doberman dog to intimidate them. The girls had been raped and beaten. Spesivtsev then killed one of the girls and forced her friends to cut flesh from her body, which he gave to his mother to cook. The second girl had been killed by the Doberman and Spesivtsev was attacking Olga with a knife when the plumber began breaking down the door. He’d then jumped from a balcony and fled.