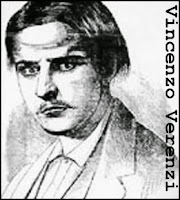 
Vincenzo Verzeni stood just 5-foot-5, but that did not stop him going down in history as one of Italy’s most ferocious killers. Raised in a dysfunctional family, where he suffered vicious beatings at the hands of his alcoholic father, Verzeni was nonetheless known as a polite and pleasant child. Behind that personable exterior though, lived a monster who spent most of his time indulging in violent fantasies.

In 1870, Verzeni eventually acted on his impulses, killing and severely mutilating 14-year -old Giovanna Matta. When the girl’s body was found, it was clear that her killer had tried to suck blood from the victim. Thus began the reign of the monstrous Vampire of Bergamo.

Over the next two years, Verzeni wandered the countryside at will, attacking at least seven more women and killing at least one. When he was eventually caught, he admitted freely to the crimes. He said that he had felt the compulsion to bite his victims and suck blood from their wounds. However, he had never sexually molested any of the women. Indeed, he appeared totally ignorant on sexual matters.

At trial, Verzeni was found guilty by a majority of one vote and for was sentenced to prison with hard labor. He was later declared insane and sent to a mental asylum in the town of Porta Vittoria il Senavra. Here, he was subjected to incredibly cruel treatments,  including boiling glue burns, electric shocks, ice showers and immersion in boiling hot water.

Given these treatments it is perhaps unsurprising that Vincenzo Verzeni hanged himself in his cell.