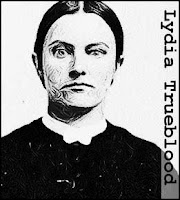 
A classic “Black Widow” Lyda Trueblood married six men during her murderous career and killed four of them, collecting substantial insurance payouts along the way. She also murdered her daughter and brother-in-law.

Husband number one was Robert C. Dooley, who met the plain-looking Lyda in Twin Falls, Idaho and asked her to be his bride in 1912. Soon after they were married and had a daughter who they named Lorraine. However, in 1915, tragedy struck when first Lorraine and then Robert's brother, Edward, died suddenly. Later that same year, Robert died, leaving Lyda as the sole beneficiary of his estate.

Although the spate of deaths had still not attracted official attention, a chemist from Idaho named Earl Dooley was suspicious. He performed tests on Meyer’s body and found copious amounts of arsenic. Tests were then performed on the exhumed bodies of Lyda’s former husbands, brother-in-law, and daughter. All showed traces of arsenic.

A warrant was issued for Trueblood’s arrest, but she had already fled to California and married a fifth man, Paul Southard. Fortunately for him, he refused Lyda’s request to take out a large insurance policy. It probably saved his life. A short while later Southard was transferred to Hawaii, and it was there that the authorities eventually caught up with Lyda Trueblood.

Lyda was tried, convicted and sent to prison, but she managed to escape and marry a sixth husband, Harry Whitlock. She’d just convinced him to take out life insurance when she was recaptured. Sent back to prison, she spent the rest of her life behind bars, dying in February 1958.