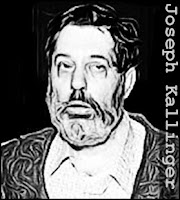 
Adopted as a child and subjected to horrendous abuse during his childhood, it is perhaps understandable that Joseph Kallinger grew up with some issues. He spoke of hearing voices and experiencing hallucinations. Then, after a knifepoint rape by a gang of youths, he became a chronic masturbator, usually clutching a knife in his hand as he pleasured himself.

In 1953, 17-year-old  Kallinger married his childhood sweetheart, Hilda Bergman, fathering two children by her before she left him due to physical abuse. He remarried in 1958, this union producing five more children. However, the domestic abuse continued, as did his psychotic episodes. Over the next decade, Kallinger would be in and out of mental institutions. He also attempted suicide three times.

Kallinger spent time in prison on child abuse charges in 1972, after three of his children went to the police. He was released in 1974 by which time he was constantly suffering auditory hallucinations, and seeing visions of a floating head that was instructing him to kill. In July 1974, he started obeying those instructions.

Recruiting his 13-year-old son Michael as an accomplice, Kallinger embarked on a crime spree. Over a period of six weeks he and Michael traveled to Philadelphia, Baltimore, Maryland and New Jersey, robbing, assaulting, and sexually abusing four families during a series of violent home invasions. They also committed three murders. 21-year-old nurse Maria Fasching was stabbed to death; 9-year-old Jose Collazo was tortured and killed; Kallinger’s own son, Joseph Jr. was drowned in a barrel in an abandoned house.

The Kallingers were captured after a bloodstained shirt left at one of the crime scenes was traced via a laundry mark to Joseph Kallinger.

Kallinger was sentenced to life in prison, while Michael was placed on probation until his twenty-fifth birthday. Joseph Kallinger died in prison of a seizure on March 26, 1996. He was 59 years old.