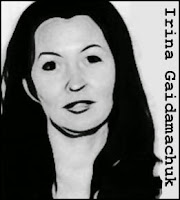 
She was known as 'Satan In A Skirt,' and with good reason. Born in the town of Nyagan, Russia, Irina developed at taste for vodka at a young age. By her teens she was already an alcoholic and beyond the control of her parents. In 1990, aged 18, she moved to Krasnoufimsk where she met a man named Yuri and subsequently had two children by him. But Irina's heavy drinking caused trouble in the relationship. Yuri eventually tired of her drinking away all the housekeeping money he gave her and refused to give her any more. Desperate for her fix, Irina resorted to monstrous measures.

Between 2002 and 2010, 17 elderly women were bludgeoned to death in their homes in Krasnoufimsk. The obvious motive was theft as all of the residences had been ransacked. But the police investigation was hampered as they hunted for a male suspect. Then reports began to come in of a well dressed woman spotted near the crime scenes. Gaidamachuk was eventually caught after she murdered a woman who was known to her.

Under interrogation, Gaidamachuk admitted to multiple murders and explained her M.O. She would  approach her elderly victims posing as a social worker. Once she gained entry to the apartment she'd beat and bludgeon the unfortunate woman to death, then rob her of her meager possessions. The motive, she said, was to get money for booze.

Irina Gaidamachuk went on trial in February 2012. Found guilty of 17 counts of murders, she was sentenced to just 20 years in prison, a sentence that was broadly criticized as too lenient.