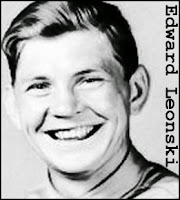 
Edward Leonski described himself as “Jekyll and Hyde,” and the heavy-drinking U.S. Army private certainly lived up to that billing while stationed in Melbourne, Australia during World War II. Over the space of just four weeks, he strangled three women.

The first victim was Ivy McLeod, found dead on the night of May 2, 1942, after leaving a bar to walk home. Just a week later another woman, Pauline Thompson, was murdered in a startlingly similar fashion. With the police now hunting the killer, Gladys Hosking was murdered on May 28. And the strangler attempted another murder just days later. However, the obviously inebriated assailant inexplicably let his victim go after she threatened to report him to the police.

Suspicion focused on American soldiers after the police received a report of a G.I.spotted with blood-stained clothing after the Hasking murder. Troops in Melbourne were assembled for a parade, and the surviving victim unerringly picked out Edward Leonski as the man who had attacked her. Under interrogation, the stocky Texan quickly broke and gave a full confession. He also offered a strange motive, saying that the female voice drove him crazy.

Leonski was dubbed the “Brown-out Strangler" because his attacks occurred while lights in Melbourne were dimmed due to war time regulations. At trial he entered a plea of not guilty by reason of insanity, but was found sane and guilty. He was hanged on November 9, 1942.