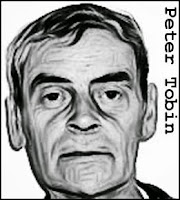 
Born in Johnstone, Renfrewshire, Scotland, Peter Tobin grew from a troubled child to a brutal and abusive young man, whose three wives all divorced him on grounds of domestic abuse. He was also a violent sex offender convicted of the knife-point rape to two 14-year-old girls in Havant, in August 1993.

The rapes earned him a 14 year prison term. On his release in 2004, he moved back to Scotland where he soon received a 30-month sentence for failing to register as a convicted sex offender.

In September 2006,  Tobin was working as a handyman at St. Patrick's Roman Catholic Church in Glasgow, when he raped and murdered 23-year-old student Angelika Kluk, burying her body under the chapel floorboards. By the time the corpse was discovered on September 29, Tobin had fled. He was tracked to London shortly afterwards, arrested and brought back to Scotland for trial.

Tobin denied killing Angelika, but was found guilty and sentenced to life imprisonment. While serving that term, it emerged that Angelika Kluk was not his only victim.

In November 2007, a search of Tobin's former home in Margate, Kent turned up the remains of two females. The victims were believed to be 15-year old Vicky Hamilton, last seen alive in February 1991, and Dinah McNicol who had disappeared while hitchhiking home from a music festival on August 5, 1991. Tobin was later tried and found guilty of both these murders earning two more life sentences.

Peter Tobin will never be freed from prison. But he remains a suspect in at least 18 more murders. In addition, Scottish police believe that he may have been “Bible John,” a still unidentified serial killer who murdered three Glasgow women in the late sixties.