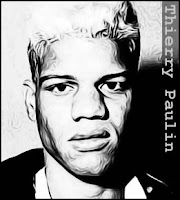 
Between 1984 and 1987, a succession of elderly women were murdered in their homes in the Montmartre district of Paris, France. The victims were found with their hands and legs tied, and had been brutally strangled, stabbed, and beaten. One of the women suffered over 60 stab wounds to her frail body, while another had been forced to swallow bleach.

As the police hunted desperately for the sadistic killer, panic spread through the area, with the elderly locking themselves indoors and only venturing out in groups. After sunset, the streets of the thriving area were all but deserted.

But despite the massive police operation three years passed with very little progress in the case. Then investigators caught a break when the killer blundered and left one of his victims alive. She was able to give an excellent description of her attacker leading the police directly to a petty thief and small-time drug dealer named Thierry Paulin.

A tall, athletic twenty-five year old, Paulin was originally from the French colonial island of  Martinique, but had moved to France at age 12 to live with his father. Once in custody, Paulin nonchalantly confessed to 21 murders, offering up sickening details of his crimes. He also told the police something the did not know, many of the murders had been committed with the help of his gay lover, Jean-Thierry Mathurin. Mathurin was arrested and soon admitted his role in the killing spree.

Paulin and Mathurin were both convicted on multiple counts of murder and sentenced to life imprisonment. However, by the time he started his prison term, Paulin was already afflicted with AIDS. He died on April 16, 1989, at the age of 26.

Jean-Thierry Mathurin remains in prison and is unlikely to ever be released.