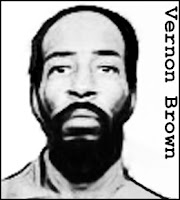 
A criminal with a disconcerting interest in young girls, Brown racked up his first jail time in Indiana in 1980, when he was sent to prison for molesting a 12-year-old. Shortly after his release, nine-year-old Kimberly Campbell was found raped and strangled to death in a house owned by Brown's grandmother. Brown was the obvious suspect but the police were unable to find enough evidence to charge him. A year later he skipped town to avoid arrest on new child molestation charges.

Brown showed up next in St. Louis, Missouri. In March 1985, 19-year-old Synetta Ford was found stabbed and strangled in her St. Louis apartment. Working under an alias at the apartment complex, Brown again came under suspicion only for the charges to be dropped for lack of evidence.

On October 25, 1986, nine-year-old Janet Perkins disappeared while walking home from school in St. Louis. Her route would have taken her directly past Brown’s residence and when police searched the premises they found the little girl's raped and strangled body hidden in the basement. Brown claimed that he had been under the influence of drugs when he killed Janet, but there would be no escape this time.

Found guilty of murder, Vernon Brown was sentenced to death. He was executed by lethal injection in Missouri on May 17, 2005. Two more murders have subsequently been linked to him and he remains a suspect in 20 more.