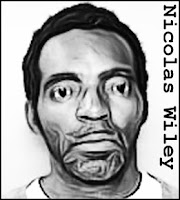 A violent sex offender with a long rap sheet, Nicolas Wiley was inexplicably paroled from prison in early 2004. After his release, he found work as a handyman at an apartment complex in Syracuse, New York. Within weeks of him taking up that position, 31-year-old Lottie Thompson was found stabbed to death in her apartment. It was Wiley himself who tipped the building manager off to a foul smell coming from the apartment.

Finnerty’s body was discovered in a nearby dumpster, dead from multiple stab wounds. The other victim has never been found, leading police to speculate that she may have been stuffed it into a garbage can that was hauled off to the county’s trash burning plant.

As a registered Level 3 sex offender, Wiley was an obvious suspect and under interrogation he soon implicated himself in the murders, also hinting that there might be other victims.

Found guilty on two counts of murder, Wiley was sentenced to life in prison without the possibility of parole. His case resulted in the New York State Senate passing legislation that compels law enforcement agencies to inform residents of convicted sex offenders living in their communities.