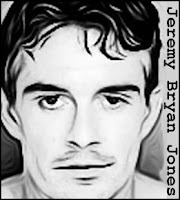 Handsome and charming, Jeremy Bryan Jones boasted that he could “talk the panties off a nun.” But the silver-tongued ladies’ man was also a brutal rape slayer who embarked on a decade long murder campaign from 1992 to 2004, during which he may have killed at many as 21 women.

Arrested eventually in 2004 for the murder of 16-year-old Amanda Greenwell, Jones boasted to police about his killing spree. In a rambling confession, he admitted that he’d killed Tina Mayberry outside a Douglasville bar in 2002 and that he kidnapped, raped and killed Patrice Endres, a 38-year-old hairdresser from Forsyth County. In addition, he claimed to have killed three prostitutes in Mobile, Alabama, five in the Atlanta, Georgia and another in New Orleans.

Jones also said that he was the man behind an unsolved double homicide in Oklahoma, in which a couple was shot to death in their trailer and then set alight. Their 16-year-old daughter and her best friend are still missing. According to Jones, he raped and killed the girls, then threw their bodies into a mine shaft.

Although detectives were initially dubious of these claims, a polygraph and further investigation connected Jones conclusively to four murders, with strong links to at least a dozen more, spanning Kansas, Alabama, Georgia, Louisiana and Oklahoma.

Jones was sentenced to death in November 2005, for the murder of 44-year-old Lisa Nichols in Turnerville, Alabama.