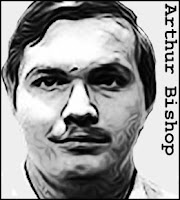 
Raised as a devout Mormon in the small town of Hinkley, Utah, Arthur Gary Bishop first succumbed to his warped sexual urgings when he served as a mentor in the "Big Brother" program. At first, no one suspected him of molesting the boys under his care. However, he got into trouble with the law on another charge, that of embezzlement. While awaiting trial, he skipped out on his bail and fled to Salt Lake City, where he adopted the alias "Roger Downs."

Eighteen months passed. Then, on June 22, 1983, Troy Ward disappeared from a Salt Lake City park on his sixth birthday. Less than a month later, 13-year-old Graeme Cunningham vanished from his home, just two days before he was scheduled to go on a camping trip with an adult chaperone, 32-year-old Roger Downs.

While questioning Downs, detectives realised that they had spoken to him before, regarding the disappearances of Alonzo Daniels and Kim Peterson. That raised a red flag and it was decided to bring him in to the station. Under interrogation, Bishop quickly cracked and admitted to five counts of murder.

At trial, Bishop tried to deflect the blame, saying that his addiction to child pornography had driven him to kill. He was nonetheless found guilty and sentenced to death. The vile child killer was executed by lethal injection on June 10, 1988 at the Utah State Prison.