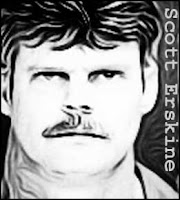 
A sexual deviant from an early age, Scott Erskine first fell foul of the law at age 15, when he was arrested for the knifepoint rape of a 13-year-old girl. At 18, he graduated to adult prison after knocking a 14-year-old boy unconscious and trying to rape him. That earned him four years in prison.

Erskine was paroled in 1984. Upon his release, he married and moved to Florida, where he fathered a son. However, the marriage was short-lived, due to Erskine’s physical and sexual abuse of his wife.

In 1993, back in California, Erskine abducted a woman from a bus stop and held her at his home for several days, repeatedly raping and sodomizing her. Eventually, he let her go, threatening to kill her if she told anyone. The woman went directly to the police and Erskine was arrested, convicted and sentenced to 70 years in prison.

As a convicted sex offender, Erskine was required to submit his DNA to a statewide database. When the police ran it, they were in for a surprise. It returned a match to the unsolved rape murders of 9-year-old Jonathan Sellers and 13-year-old Charlie Keever in March 1993. The boys had gone missing from Palm City, California and were found near the Otay River. Both had been bound, gagged and sexually molested. Charlie was lying on the ground, while Jonathan was found hanging from a tree.

Tried and found guilty of the murders, Erskine was sentenced to death. He has subsequently been linked by DNA to the rape/murder of 26-year-old Renee Baker, in Florida on June 23, 1989.