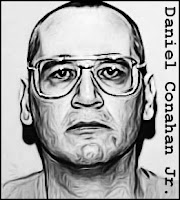 
Between 1994 and 1996 the bodies of six young men were discovered in the dense woods of Charlotte County, Florida. The corpses were found in varying stages of decomposition, but it was evident that they had been strangled and, based on similarities found at the crime scenes, detectives were confident that a serial killer was responsible.

Yet despite their best efforts, the “Hog Trail Killer" remained frustratingly elusive until mid-1996, when a man came forward with an interesting story to tell. In 1994, he had been approached by a man who had offered him money to pose for nude photographs. After he accepted, the man had driven him to a wooded area where he’d agreed to be tied to a tree for the snapshots. Once he was restrained, the photographer had turned on him, raped him and tried to strangle him. He’d given up and fled when his victim had put up a fight.

The tip-off proved to be the break investigators had been waiting for. It led to a local man named Daniel Conahan Jr. who was was quickly arrested and charged with attempted murder. That charge was later dropped but by then prosecutors had build a case against Conahan for the 1996 murder of Robert Montgomery. Montgomery was one of the victims found in the woods. He had been strangled and emasculated.

Conahan denied killing Montgomery, but there was strong forensic evidence linking him to the crime and it was enough to convince the jury. Found guilty of murder in December, 1999, he was sentenced to death.