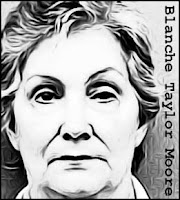 When Rev. Dwight Moore became ill with symptoms that looked suspiciously like poisoning in  1989, the police began investigating the most obvious suspect, his wife Blanche. A toxicology test was ordered and revealed that the reverend had ingested a large amount of arsenic. Miraculously, he recovered. When he did, he refused to believe that his wife was in any way involved.

The police, however, remained suspicious of Blanche Moore and that suspicion only increased when they learned that her first husband, James N. Taylor, and former boyfriend, Raymond Reid, had died in suspicious circumstances, as had her father, P.D. Kiser and her mother-in-law, Isla Taylor. In the first three cases, Moore had benefited from insurance payouts.

Exhumation orders were duly obtained for the bodies and when tests revealed copious amounts of arsenic, Moore was charged with murder. Despite protesting her innocence, Moore was convicted on one count of murder (for killing Raymond Reid), She was sentenced to death on January 18, 1991, although that sentence has yet to be carried out.