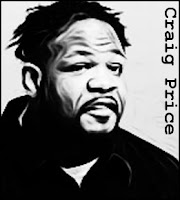 Considered the youngest serial killer in US history, Craig Price was responsible for a brutal series of murders in Rhode Island in the late 1980s. A black youth from a working class family, Price committed his first murder at the age of just 13. The victim was Rebecca Spencer, a 27-year-old white female who he had been watching for months before he eventually broke into her home and stabbed her to death in a frenzied attack.

Two years later, in 1989, Price committed and even more savage attack. Now 15, he invaded another neighborhood home and murdered the occupants, Joan Heaton, 39, and her daughters, Jennifer 10, and Melissa 8.

The killings were so similar to the Spencer murder that the FBI was called in to compile a profile of the likely suspect. But their analysis failed to suggest a black teenager as the killer. Instead, it was the work of an observant detective that brought Price to justice. Noting a cut on the teenager’s hand, the detective asked him about it. When Price told a rather obvious lie, he was elevated to the top of the suspect list.

Price was brought in for questioning and soon made a confession. Found guilty at the subsequent trial, he was ordered to be incarcerated until the age of 21, a period of just 5 years. However, as Price continued to offend in prison, fresh sentences were added to his term. He currently has at least 20 more years to serve.