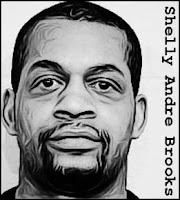 
A particularly vicious rape slayer, Shelly Andre Brooks carried out a campaign of terror against Detroit, Michigan’s prostitute population between 2001 and 2006, claiming at least seven victims. The women were all beaten to death with rocks or chunks on concrete, their bodies left in abandoned buildings and vacant lots on the city’s east side.

All of the women had been lured to these remote locations with the promise of cash for sex. However, once Brooks had the victim isolated, he turned on her, attacking without mercy. He would then have sex with the victim, either while she was dead or dying.

Brooks, who has been positively linked by DNA to seven murders, is suspected of at least seven more. But he might have gone on killing indefinitely had he not allowed one of his victims to escape. Following his usual M.O., Brooks lured the woman to a quiet spot then beat her unconscious, raped her, and left her for dead. The woman, however, survived and was able to name her attacker by the name she knew him - “E.” This was the street name used by Shelley Andre Brooks.

Confronted with the evidence against him, Brooks soon confessed. He was subsequently convicted and sentenced to life in prison without the possibility of parole.