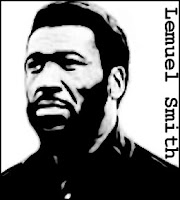 Lemuel Smith was already a convicted serial killer, serving a triple life term, when he committed the most sensational murder of his criminal career on May 15, 1981. That involved the brutal rape slaying of on-duty female correctional officer, Donna Payant, who was savagely strangled and beaten to death. Smith, however, had left telltale clues on his victim’s body, several bite marks which were conclusively matched to him.

The murder of a corrections officer carries a mandatory death sentence. However, Smith’s case soon attracted high profile human rights lawyers, William Kunstler and C. Vernon Mason, who agreed to defend him. They employed a controversial strategy, attacking the character of this victim, suggesting (without basis) that Donna Payant had been promiscuous and that one of her colleagues had killed her. It was to no avail. Found guilty of murder, Smith was sentenced to death.

The brutal killer would, however, escape the executioner when his sentence was commuted to life in prison in 1984. Celebrating that decision, Smith boasted that he could rape and kill and that the state couldn’t touch him. He was wrong on that score. Deemed a danger to his fellow prisoners he was sent to solitary confinement where he would remain for the next twenty years, the longest such span for a prisoner in the United States.