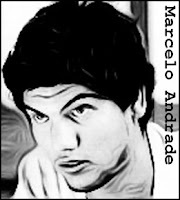 The son of poor migrants, Marcelo de Andrade grew up in the slums of Rio de Jainero. Physically and sexually abused as a child, he ran away from home at age fourteen and became a prostitute. At sixteen he began a long lasting relationship with an older man but when that ended he began accosting and raping children. It was a short step from there to murder. Andrade soon embarked on a killing spree that would claim 14 young victims. He also drank their blood, later calming that it was so that he could become as beautiful as they were.

In December 1991, Andrade accosted ten-year-old Altair de Abreu and his six-year-old  brother, Ivan. After strangling Ivan, he told Altair that he was in love with him and asked the terrified youngster to come and live with him. The boy agreed, but made his escape at the first opportunity and went to the police.

Andrade was arrested on December 18, 1991. Under questioning he confessed to 14 murders and led the police to several bodies. Deemed unfit to stand trial, he was sent to the Heitor Carrilho Psychiatric Hospital. He escaped on January 24th 1997, but was soon recaptured, walking along a road. He told his captors that he was on his way the Holy Land.