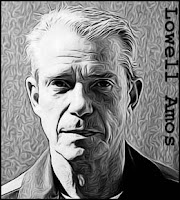 
By the time his wife Roberta died of an apparent cocaine overdose in a Detroit hotel room in December 1994, Lowell Amos was already a two time widower. His previous two wives had also died under somewhat suspicious circumstances but there was never enough to pin their deaths on Lowell. This time, though, he’d made a crucial mistake. Police found traces of Roberta’s makeup on a pillow suggesting that she may have been suffocated.

It wasn’t enough to charge Amos, but as police looked deeper into his past they turned up a pattern involving his two previous spouses. Lowell always suggested drug use as a contributing factor and he always benefited generously from insurance payouts. The police also learned that Amos’ mother had died unexpectedly after he moved in with her. Once again, he had benefited financially.

Amos was eventually arrested for Roberta’s murder in November 1996.The prosecution surmised that he had given her sleeping pills in a glass of wine, then injected her with cocaine to cause an overdose. However, Roberta had begun convulsing and Amos had then smothered her with the pillow.

Convicted of murder in October 1996, Amos was sentenced to life imprisonment without possibility of parole. No charges have ever been brought in the other three cases.