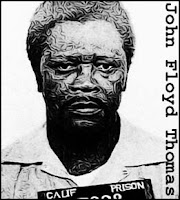 
A native of Los Angeles, California, John Floyd Thomas, Jr. was raised by an aunt after his mother died when he was just 12 years old. Other than that, his childhood appears unremarkable. After high school, he enlisted in the U.S. Air Force, although he was later dishonorably discharged. Back in civilian life, he soon turned to criminality, committing a string of burglaries that landed him in prison until 1966.

During the mid-1970s, Los Angeles was plagued by a series of rape/murders which the police  attributed to a perpetrator known as the “Westside Rapist.” The killer preyed on elderly women who lived alone, raping them and then choking them to death. At least 17 victims were killed in this way before the killings inexplicably stopped. Then, a decade later, a series of similar crimes started up in Claremont, some 40 miles away. Five elderly women were raped and killed, before the killer dropped out of sight.

Although investigators were certain that the same man was responsible, they had few leads and the case soon went cold. It would remain so until October 2008 when when Cold Case investigators got a match to convicted felon John Floyd Thomas, Jr. Thomas was arrested on April 2, 2009. He subsequently admitted to seven murders and was sentenced to life without parole.