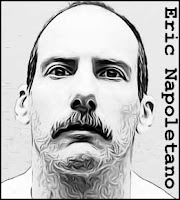 
Eric Napoletano was a man who seemed to attract tragedy. In 1984, his fifteen-year-old girlfriend, Marilyn Coludro, had been stabbed to death, her body found dumped in Pennsylvania. In 1985, his mother-in-law was gunned down on a Bronx street corner. Then, in 1990, his second wife, Myra Acevedo, went missing from their New Jersey home. She was later found buried in a shallow grave in Delaware.

Evidence in all of the cases pointed to Napoletano, but he always had a solid alibi, provided by his mother, and was always cool under questioning, always coming up with the right answers. The police would later find out why. Napoletano’s mother, Carolyn, was a civilian employee of the New York City Police Department, and was accessing confidential police documents and feeding him information.

In the murder of Myra Acevedo, however, the police finally had a compelling case against Eric Napoletano. But again mother came to the rescue. Before the cops could move in to arrest him, Napoletano disappeared.

Napoletano was eventually tracked to Albuquerque, New Mexico, where he was arrested by federal agents on March 27, 1991. Given their previous experiences in questioning him, the police prepared themselves for a long hard slog. But this time the had a trump card. His mother had also been arrested, on conspiracy charges.

Faced with the prospect of Carolyn doing jail time, Napoletano struck a deal, immunity for his mother in exchange for a guilty plea. He was sentenced to life imprisonment in New Jersey on June 25, 1993.