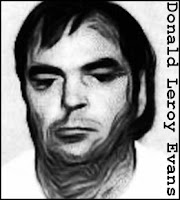 
Donald Leroy Evans is either one of America’s most prolific serial killers or the biggest hoaxer who ever lived. Arrested in Mississippi for the rape and murder of 10-year-old Beatrice Routh, Evans confessed to sixty more murders. He claimed that after his discharge from the Marines in 1970, he began wandering the country, killing just about anyone who crossed his path.

The authorities, of course, had to check out Evans’ claims, although they were wary, having recently been embarrassed by the false confessions of Henry Lee Lucas. Turns out that Evans too, was exaggerating. Many of the claims he made were clearly false although he was linked to 12 murders.

Evans would stand trial for only one of those killings, relating to the strangulation death of Ira Jean Smith in Florida. The life sentence he received was academic, as he’d already been sentenced to death for the Routh murder.

Donald Evans would never keep his date with the executioner. In January 1999 he was stabbed to death by fellow death row inmate, Jimmy Mack.