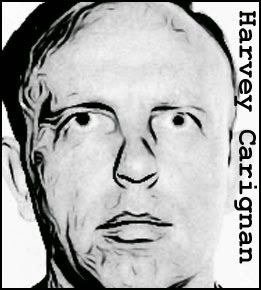 
Harvey Carignan should not have lived long enough to become a serial killer. Convicted of a murder in Alaska in 1949, he was sentenced to death, only for the punishment to be overturned on appeal. After serving just nine years for attempted rape, he was released in 1960.

Carignan did not learn he lesson of his lucky escape and was arrested several times (for burglary, assault, and other crimes) before drawing a 15 years prison term in 1965. With time off for good behavior he was back on the streets by 1969.

He settled in Seattle, Washington, where he had two failed marriages. During that time several young women went missing from the Seattle streets. One of them was 15-year-old Kathy Miller who disappeared in May 1973. When Kathy’s corpse was found raped and beaten to death with a hammer, police learned that she’d disappeared after attending a job interview at the service station that Carignan leased. Fearing that he was about to be arrested, Carignan fled to Minneapolis, Minnesota. The attacks on women soon started up there.

On June 28, Marlys Townsend was clubbed unconscious at a bus stop. In September, 13-year-old Jewry Billings was beaten and raped. Both survived. On August 10, Carignan’s girlfriend Eileen Hunley disappeared. Her decomposed corpse was found five weeks later. By then Carignan had carried out another attack, targeting hitchhikers Lisa King and June Lynch, both sixteen. June escaped, while Lisa was beaten unconscious with a hammer before Carignan fled.

Gwen Burton was raped and bludgeoned to death on September 14, after her car broke down and Carignan stopped to offer assistance. On the day her body was found, the hulking killer attacked hitchhikers Sally Versoi and Diane Flynn.Two days later, eighteen-year-old Kathy Schultz was beaten to death. Her corpse was found the following day, the skull destroyed by savage hammer blows.

With a major manhunt underway, Minneapolis police showed mugshots of potential suspects to the surviving victims. One of those mugshots was of Harvey Carignan and all of the survivors unerringly picked him out. A search of his property turned up further evidence and Carignan was arrested. At trial he was convicted on multiple charges and sentenced to a total of 150 years in prison.