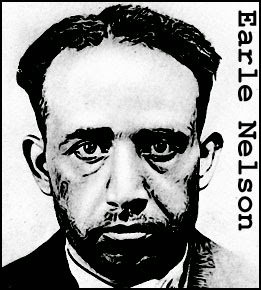 
One of America's first known serial sex killers, Earle Nelson was a  born in Philadelphia in 1897. Both of his parents died of venereal disease before he was a year old, and he was adopted by his grandmother, a devoutly religious woman who indoctrinated the boy into her  Bible-thumping ways. After his grandmother died, he was taken in by his Aunt Lillian. Shortly after, the ten-year-old Nelson suffered a severe head injury when he was hit by a  streetcar. This trauma left him with physical and mental problems throughout his life.

In 1918, Nelson was admitted to a mental institution after her tried to rape a neighbor's daughter. He absconded several times and eventually the authorities gave up on chasing after him. In 1926, he married a spinster 40 years his senior, but the marriage broke down over Nelson's excessive sexual demands.

On February 20, 1926, Nelson appeared at the San Francisco rooming house run by 60-year-old Clara Newman. He was there to enquire about a room, but after being shown to the attic he attacked the landlady, strangled her and then raped her corpse.

The killing of Clara Newman whetted Nelson's taste for murder and necrophilia. Between February 1926 and June 1927, he ranged up and down the west coast and across America, strangling and raping. His targets were usually elderly boarding house proprietors but the killings caused panic across the country as the press ran lurid stories about the so-called "Gorilla Murderer."

On June, 8 1927, Nelson crossed into Canada where he would commit two more murders (including that of 14-year-old Lola Cowan) before his eventual capture on June 10, 1927.

Tried at Winnipeg in November 1927, Nelson's insanity defense proved unsuccessful. He was hanged on  January 13, 1928.