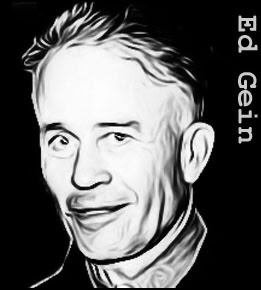 
One of America’s most notorious serial killers, the inspiration behind Psycho and Leatherface, Ed Gein in fact committed only three murders. What made this such a sensational case was what Gein did with the bodies, turning his home into a macabre museum of artifacts fashioned from human skin and bones.

Gein was born in La Crosse County, Wisconsin. He grew up on a farm outside the small town of Plainfield, with his parents and older brother George. Gein’s mother, Augusta, was a religious fanatic who constantly preached to her sons about the evils of the world, especially drinking and the immorality of women. Ed was devoted to her.

Ed’s father died of a heart attack in 1940. In May 16, 1944, the Gein brothers were fighting a brush fire close to the farm, when George was killed, ostensibly by smoke inhalation. However, bruises on his head suggested that he might have been bludgeoned, with Ed the only suspect. No charges were filed.

After his brother's death, Gein lived alone with his mother until her death on December 29, 1945. It left him devastated. Afterwards he boarded up the rooms used by Augusta and confined himself to the kitchen and small bedroom.

Over the years that followed Gein became increasingly reclusive, remaining at the farm, supporting himself by doing odd jobs for neighbors. Then, on November 16, 1957, hardware store owner Bernice Worden disappeared, and police found evidence to suggest Gein might have been involved. They headed out to the Gein farm where they found  Mrs. Worden's decapitated body in a shed, hung upside down and butchered like a deer. She had been killed by a .22-caliber rifle. The mutilations had been performed after death.

Inside the house police discovered the full extent of Gein’s depravity. Among the items found were; masks made of human skin, soup bowls made from human skulls; chairs upholstered with skin; a belt made of female nipples, a pair of lips on a draw string for a windowshade, a lampshade covered with skin from a human face.

Although so many body parts pointed to a major killing spree, Gein had in fact got most of them by robbing graves in the local cemeteries. He had killed only one other woman, 54-year-old Plainfield tavern owner Mary Hogan, who had gone missing December 8, 1954. Her face was one of those used for Gein’s macabre masks.

Gein was quite obviously insane, but he was initially declared fit to stand trial and sentenced to life imprisonment. He was later acquitted and found not guilty by reason of insanity. He remained incarcerated at a mental hospital until his death on July 26, 1984.