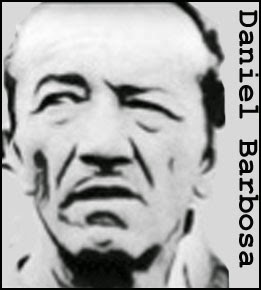 
One of a trio of prolific Colombian child killers (the others being Pedro Lopez and Luis Garavito) Barbosa preyed on young girls, killing at least 70 and by some estimates over 150.

Barbosa’s first foray into pedophilia came with the assistance of his live-in lover, who helped him lure, drug and rape young girls. However, one of the rape victims remembered what had happened to her and led the police to Barbosa’s door. Convicted on that charge, Barbosa served out his full 8-year term. On his release in 1973, he swore that no one would live to inform on him again.

Settling in the city of Barranquilla, he began work as a TV technician. While walking past a school one day, he spotted a nine-year-old girl unattended. Luring the child to an abandoned building, Barbosa raped and strangled her. He then fled the scene, realizing only later that he’d left behind the TV monitor he’d been carrying. When he returned to retrieve it, the police were waiting for him.

Barbosa was sentenced to 30 years in prison, to be served at the notorious Gorgona island prison. However, he managed to escape in November 1984 and made it to the mainland on a makeshift raft. The authorities assumed that he’d drowned or been eaten by sharks. But Barbosa was very much alive and over the next two years, he ranged across Colombia and Ecuador, raping and killing wherever he stopped.

On February, 26, 1986, police in Quito, Ecuador  spotted Barbosa walking along a road leading out of the city. They stopped to question him and were alerted by his suspicious behavior. Barbosa was arrested and a search of the immediate area yielded the freshly butchered corpse of a nine-year-old girl. In custody, he calmly confessed to 71 murders over the previous two years. He later led the authorities to several mass graves.

As Ecuador has no death penalty, Barbosa was given the maximum sentence, amounting to just 16 years. He’d serve just half of that sentence. On November, 13 1994, Daniel Camargo Barbosa was stabbed to death by Luis Masache Narvaez, the cousin of one of his victims.