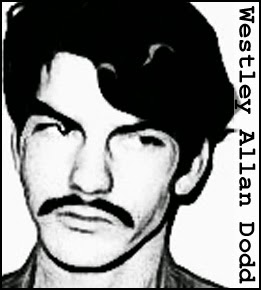 
One of the most repulsive serial killers in American history, Dodd murdered three young boys over the course of two months in 1989. He would undoubtedly have killed more had he not been caught.

Dodd had been fantasizing about killing a child for a long time when he accosted brothers Cole and William Neer (aged 11 and 10 respectively) in Vancouver, Washington’s David Douglas Park on September 4, 1989. The boys were led back into the bushes, tied up and sexually molested before Dodd stabbed them to death.

Eight weeks later, Dodd abducted 4-year-old Lee Iseli from a school playground in Portland, Oregon. He took the toddler back to his apartment, where he spent the night molesting and torturing him before hanging him with a leather belt. The child’s tiny corpse was left hanging in a closet for several days before Dodd dumped it at Vancouver Lake.

On November 11, Dodd tried to abduct a 10-year-old from the men’s room of a movie theater in Camas, Washington. However, the boy kicked and screamed alerting his stepfather who apprehended Dodd just as he was trying to force the child into his car.

Once in custody, Dodd admitted that he’d been sexually assaulting children since the age of 13 and had molested as many as 175 boys over a 15-year period. During that time, he had graduated from exposing himself to his victims, to fondling, to sexual assault and eventually to sexually sadistic murder. “Thoughts of killing children excite me," he said, as though that justified everything.

Westley Allan Dodd pled guilty to murder at his January 1990 trial. He was hanged at Washington’s Walla Walla Prison on January 5, 1993.