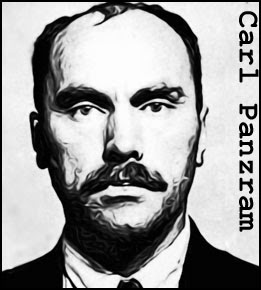 Carl Panzram began his criminal career at an early age. He was just eight when he racked up his first arrest - for drunk and disorderly conduct. That earned him a spell in the reformatory but Panzram was unrepentant and despite his youth was almost impossible for the warders to handle. At age eleven, he burned down the school’s warehouse, causing $100,000 worth of damage.

Panzram would later say that the learned how to be a criminal in reform school. By the time he was released, he was consumed by hatred towards all mankind. He hit the road, working his way across America, robbing, raping and sodomizing as he went. Inevitably, his one-man crime spree turned to murder, sometimes carried out in the commission of another crime, sometimes for recreation.

One example of the latter occurred when Panzram went to Africa to hunt crocodiles. He hired eight black porters to accompany him on his safari but instead shot them, sodomized their corpses, and fed them to the crocs. On another occasion, he rented a yacht and invited sailors aboard, promising them free liquor. He then drugged the men, slit their throats and threw their bodies overboard.

Because Panzram was always on the move, the authorities found it difficult to tie any of these murders to him. They did, however, nail him on a burglary charge in August 1928. Panzram was sent to Leavenworth Prison and he immediately threatened to kill the first man who crossed him. He was true to his word, bludgeoning laundry supervisor Robert Warnke to death on June 20, 1929. He was sentenced to hang for the murder.

While awaiting execution, Panzram opened up to one of his warders and confessed to 21 more murders, countless felonies, and more than a thousand acts of forced sodomy. “For all these things,” he added. “I am not the least bit sorry.”

Carl Panzram was hanged on September 5, 1930. Defiant to the end, taunted the hangman with these final words, “Hurry it up, you Hoosier bastard, I could hang a dozen men while you're fooling around.”