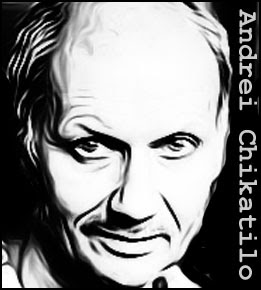 
One of the most fearsome serial killers in history, Andrei Chikatilo was a pedophile and cannibal who slaughtered over 50 victims in Ukraine and Russia between 1978 to 1990.

A former schoolteacher, Chikatilo lost his job due to accusations of child molestation. He then accepted a position as a supply clerk, something that afforded him the opportunity to travel throughout the Soviet Union. The new job suited Chikatilo’s needs as a serial killer down to the ground. Although he had already committed two murders, he now upped the ante, embarking on an unprecedented killing spree.

Chikatilo’s M.O. was simple. He generally hunted around bus terminals and train stations, luring his young victims with promises of money, drugs or alcohol. If a potential victim turned him down, he simply shrugged his shoulders and moved on immediately to someone else. Once someone agreed to go with him, he’d lead them into a forested area where he’d attack. The victim would be stabbed, beaten and strangled into submission. Leaves and dirt would be forced down the throat to stop the victim screaming. Chikatilo would then get to work with his knife, slashing and stabbing, cutting out tongues and genitals, slicing off noses and nipples, consuming these as the scene. He’d often gorge out the victim’s eyes because he believed the old wives tale that the eyes retained an image of the last thing the victim saw. Often, Chikatilo would reach sexual climax while carrying out these mutilations. Afterwards, he’d cover the victim with brush and walk back to the station to resume his journey as though nothing had happened.

Chikatilo remained at large for so long mainly because the Soviet state suppressed information about the atrocities he was committing. This severely hampered the police investigation, until the investigators caught a break in November 1990, when Chikatilo was spotted coming out of some woods where the mutilated body of a young girl was later found. Placed under arrest, he eventually admitted to 56 murders.

The trial of Andrei Chikatilo began on April 14, 1992, with the killer enclosed in a steel cage to protect him from distraught relatives of the victims. Chikatilo’s bizarre behavior during the proceedings suggested to all present that he was insane but he was found guilty nonetheless and sentenced to death.

He was executed by a single bullet to the back of the head, on February 14, 1994. His last words were reportedly: “Don't blow out my brains! The Japanese want to buy them!”


Read the horrific true story of Andrei Chikatilo, plus 29 more serial killer cases from around the world in Human Monsters Volume 2. Available now on Amazon.