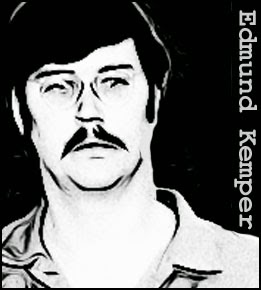 
When Ed Kemper was 15, he murdered his grandparents, because he later said, he “wanted to see what it felt like to kill Grandma.” That saw him committed to Atascadero State Hospital where he underwent a barrage of psychiatric tests that diagnosed as a paranoid schizophrenic and also found him to have a near-genius IQ.

Kemper remained at the hospital for six years until, in 1969, doctors deemed it safe to release him. Now 21 years old, the hulking 6-foot-9, 300 pound, young man was placed in the care of his mother, in Santa Cruz, California. His juvenile record was also sealed.

After working a series of odd jobs, Kemper found employment with the Department of Public Works Highways Department (these days known as Caltrans). Thereafter, he began cruising the highways and picking up hitchhikers.

At first, Kemper did not harm the women he offered rides to. Instead, he used these runs to develop a placid, non-threatening persona, offsetting his massive size, which naturally intimidated people.

Murder, however, was never far from Ed Kemper’s mind. On May 5, 1972, he picked up college students, Mary Anne Pisce and Anita Luchese, drove them to an isolated spot, then stabbed and strangled them to death. Unsure of what to do with the bodies, he drove around with them in his car, then took them back to his mother’s house where he dissected them. He later dumped the body parts in a ravine, although he held onto the heads until they rotten and had to be disposed of.

Over the next eight months, Kemper murdered four more female students, bringing their bodies back to his home to mutilate and have sex with. He would usually cut off the victim’s head, depersonalizing her, before raping the headless corpse. The bodies would later be discarded in ravines or open fields, although he buried one victim’s head in his back yard.

In April 1973, Kemper’s love/hate relationship finally boiled over and he battered her to death with a hammer while she slept. Thereafter, he decapitated her and raped her headless corpse. Later, he used her head as a dartboard and also cut out her vocal cords and pushed them into the garbage disposal. His murderous urges still not satiated, Kemper then phoned his mother's best friend and invited her over for dinner. When the woman arrived, he killed her too.

Kemper must have realized that he would be the number one suspect in the murders, so he got into his car and fled east. However, after hearing a news bulletin about his crimes on the radio, he stopped the car at a Colorado gas station, called the police and confessed. He was still waiting when they arrived to arrest him.

Once is custody, Kemper had no hesitation in admitting to murder, providing a sickening confession that included admissions of necrophilia and cannibalism. At his trial he entered an insanity plea, but was found guilty on eight counts of murder and sentenced to life in prison (the death penalty was suspended at that time). He remains incarcerated at Vacaville State Prison in California.