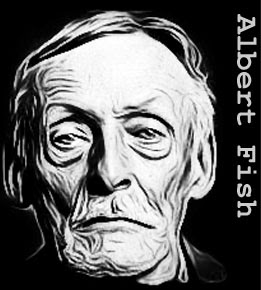 One of the most heinous serial killers in history, Albert Fish was a pedophile, sadist and cannibal who preyed on children during the early part of the 20th century.

Fish's most infamous crime was the abduction and murder of 10-year-old Grace Budd. On May 28, 1928, Fish called at the Budd residence in Manhattan, ostensibly to interview 18-year-old Edward Budd for a job (Edward had responded to a fake advertisement Fish had placed in the newspaper). Fish's real intention was to lure and kill Edward, but when he saw Edward's pretty 10-year-old sister, Grace, he shifted his focus to her instead. Claiming a prior appointment, Fish left, promising to return the following day. When he did, be persuaded the Budds to let him take Grace to a children's birthday party.

The party, like everything else about Fish's visit, was of course a lie. Rather than taking the girl to Upper Manhattan, Fish took her to an abandoned cottage in Wisteria where he strangled her. He then carved chunks of flesh from her corpse, wrapped them in newspaper and carried them home with him.

A massive search was launched but despite police efforts, no sign of Grace or her abductor was found. Fish might well have gotten away with murder, but for two things. First there was NYPD detective William King who refused to give up on the case; then there was Fish himself, who could not resist the temptation to taunt the grieving parents.

In November 1934, seven years after the disappearance of Grace Budd, her parents received a letter from Fish, in which he described in sickening detail how he'd killed, cooked and eaten their daughter. That letter would be traced to a New York rooming house, where Detective King eventually arrested Fish on December 13, 1934.

Despite compelling evidence that Fish was insane, the jury found him guilty of murder.  He was executed in the electric chair at Sing Sing Prison on January 16, 1936. He has been definitely linked to two other child murders, and is suspected of many more.