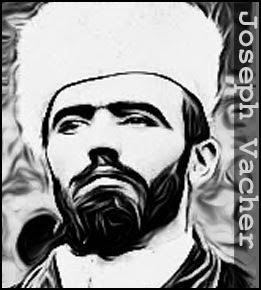 
A contemporary of Jack the Ripper, Joseph Vacher is sometimes called “The French Ripper” and with good reason, his victims were literally torn apart. Vacher showed early signs of mental instability, twice attempting suicide before being committed to an asylum. There, his behavior was so intimidating that even the most homicidal of inmates gave him a wide berth. Unable the control his violent outbursts, the authorities simply declared him “cured” and turned him loose on an unwary populace.

Vacher began drifting, ranging throughout south-east France. He also began acting out his  homicidal compulsion, raping and mutilating anyone who crossed his path. He seemed to prefer female victims, but would not shy away from killing boys and men when the opportunity arose. At least 11 victims died at his hand, more than twice the victim count of his more illustrious counterpart, Jack.

Vacher was eventually caught after he attacked a woman in a field near Bois des Pelleries. Unbeknownst to him, the woman’s husband and son were working nearby and rushed to her aid.

Arrested on the relatively minor charge of “offending public decency” Vacher was sentenced to three months in jail. While incarcerated, he inexplicably wrote a letter to the local magistrate, admitting to 11 mutilation murders.

Despite his confession, Vacher was charged with only one murder, for which he was sentenced to death. He was dragged, kicking and screaming, to the guillotine on December 31, 1898.


Read the horrific story of Joseph Vacher, plus 29 other serial killer cases from around the world in Human Monsters Volume Four. Available now on Amazon.