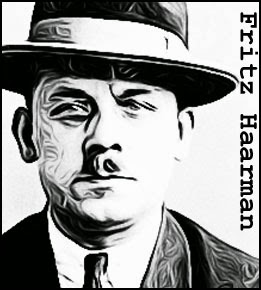 Method of murder: Strangulation / Biting through the throat


One of Germany’s most prolific (and most depraved) serial killers, Haarmann was a career criminal and sex offender who turned to murder in the bleak years after World War I. His method was simple. He would cruise the Hanover railway station with his gay lover, Hans Grans, whose job it was to point out potential victims (Haarmann later testified that Grans chose only the “prettiest boys”). The young man was lured back to Haarmann’s apartment with the promise of food and perhaps a job. Once there, Haarmann would attack, sodomize the victim and simultaneously bite through his throat killing him. Thereafter, he’d butcher the corpse, keeping the choice cuts for sale on the black market as “pork.” The rest of the body parts were dumped in the River Leine.

It is not certain how many boys and young men met their fate in this horrendous way. Haarmann was eventually convicted of 27 murders but the authorities believed that he killed many more than that.

Inevitably, bones and body parts began washing up from the river alerting the police to a serial killer in their midst. Despite his history of sexual assaults on young men, Haarmann was not suspected at first, probably because he moonlighted as a police informant. Eventually, however, evidence pointed in his direction and he was picked up as he tried to lure a teenager from the railway station.

Tried and found guilty, he was sentenced to death. That sentence was carried out on the guillotine in Hannover prison on April 15, 1925. Hans Grans was sentenced to 12 years and  disappeared after serving his time.