The Shocking True Stories of 20 British Serial Killers, including; 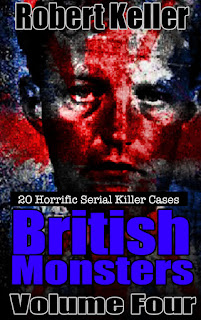 Stephen Port: Gay serial killer who used the dating app Grindr to trawl for victims, who were then drugged, raped and dumped in a local churchyard.

Steven Grieveson: Known as the ‘Sunderland Strangler’ Grieveson murdered four teenaged boys in order to keep his homosexuality a secret.

Colin Pitchfork: When two young girls are murdered in a tiny English village, the police turn to newly discovered DNA technology for an answer. But will they catch the killer before he strikes again?

Robert George Clements: A murderous Bluebeard with a taste for the high life, Dr. Clements sent four wives to their graves before he was exposed as a heartless killer.

Neville Heath: An inveterate liar and conman, Heath was also a sadistic reprobate who sent at least two young women to a horrific death.

Mary Wilson: A black widow with a twist, the elderly Wilson did not kill for money but rather to facilitate her quest to find true love.

Robert Maudsley: Known as Hannibal the Cannibal, Maudsley slaughtered four men – and ate the brains of one of his victims!

Colin Norris: Narcissistic gay nurse who murdered four of his elderly patients simply because they annoyed him.

John Scripps: A globe-trotting British serial killer who left a trail of mutilated bodies from Singapore to Mexico to Thailand.

Plus 10 more shocking cases. Click here to get your copy.

Read more »
Posted by Robert Keller at 22:57 No comments: