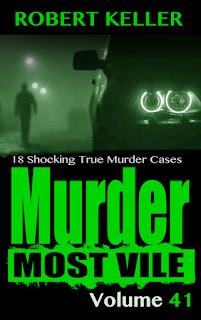 Grave Danger: A prolific serial rapist is sowing terror in the City of Brotherly Love. How long before he kills someone?

Tragedy at Gander Lake: A day at the lake turns tragic when two little girls end up dead in the water. Was it an accident or was it murder?

An Act of War: After suffering years of abuse at the hands of his father, Eric decides to strike back…with a unique method of murder.

Killing is My Business: He saw himself as a big time gangster, on par with the Krays. The crime he committed was certainly worthy of that bloodthirsty pair.

A Bad Day on Good Lane: Kathryn Schoch has suffered a terrible tragedy, the loss of a beloved child. It’s a loss that she’s not willing to bear alone.

Perchance to Die: It was a silly argument, one that no one could recall the cause of anymore. It would cost a young woman her life.

Read more »
Posted by Robert Keller at 08:47 No comments: