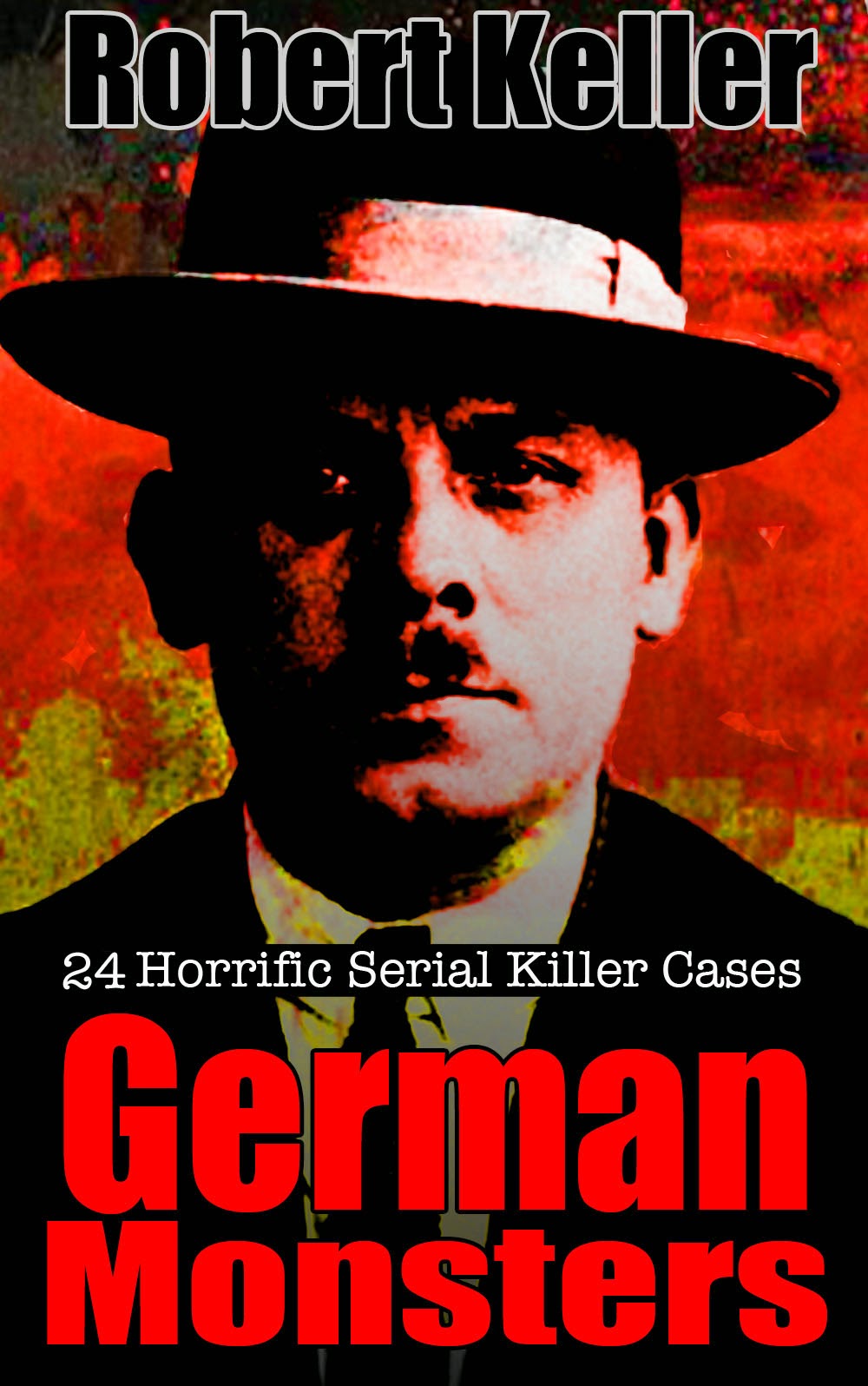 The Lives and Horrific Deeds of 24 German Monsters, including;

Volker Eckert: A deadly trucker who ranged across Europe, raping and killing wherever he stopped off.

Fritz Honka: Slaughtered at least five prostitutes, leaving their corpses to rot in his attic.

Georg Karl Grossman: The “Berlin Butcher” killed over 50 women, grinding up their flesh to make frankfurters, which he sold at his hotdog stand.

Peter Kurten: One of Germany’s most depraved serial killers, Kurten went to the guillotine for a series of horrendous sex slayings.

Manfred Wittman: Known as the “Beast of Oberfranken,” Wittman killed and mutilated three teenaged girls during the late Sixties.

Jürgen Bartsch: Sadistic paedophile who killed and dismembered four pre-teen boys between 1962 and 1966.

Joachim Kroll: A troll-like little man who preyed of children of the Ruhr region, claiming at least 16 young victims and cannibalizing their corpses.

Ernst-Dieter Beck: Charming ladies man who got his kicks throttling women to death during sex.

Rudolf Pleil: A chubby, jovial man, Pleil was addicted to murder, claiming 25 lives and describing himself as “the world’s best killer.”

Klaus Gossman: Known as the “Midday Murderer” Gossman struck while the noonday church bells disguised the sound of his pistol. Murdered seven people, either at random or while carrying out a series of robberies.

Wolfgang Schmidt: A giant of a man, Schmidt was a cross-dressing necrophile who killed five women and a three-month-old baby. 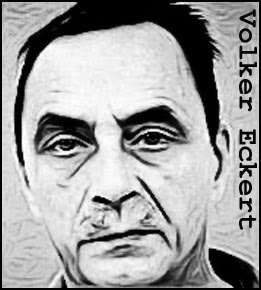 Some time after, Eckert found a wig in the attic of his family home, and transferred his attentions to that object. He knew by now that it was the hair that stimulated his fledgling libido and he had already begun to fixate on girls at his school who had long hair, in particular his 12-year-old neighbor, Silvia Unterdorfel. Volker fantasized endlessly about caressing Silvia’s hair. But he was certain that she would reject any advance. Slowly an idea began to form in his mind. If he was going to fulfill his dream, he was going to have to subdue Silvia with violence.

Yet even as this idea took hold, Eckert lacked the courage to carry it through. Months went by, during which his frustration escalated to the point where he became physically ill and was unable even to eat. He vented his anger towards his beloved doll, alternately fondling and strangling it.

Then in 1973, the 13-year-old Eckert had a new problem to concern himself with - his parents separated, sending him into a fury. Stealing his mother’s car, he disappeared for several weeks, before the police eventually tracked him down and apprehended him after a high-speed chase.

The punishment for Eckert’s rage-filled road trip was 18 months in a juvenile facility. He was returned to his mother’s care in 1974, to the apartment where the object of his lust, Silvia Unterdorfel, still lived next door. The time away had done nothing to dim his desire. On May 7, 1974, he decided to act.

Eckert was still two weeks shy of his 15th birthday on the day that he climbed into the attic of his apartment building. This was a communal space that stretched the length of the building. Creeping to the far end, he took the staircase down into the corridor in front of the Unterdorfel's apartment. Silvia opened the door herself, letting Eckert in when he said that he wanted to ask her about a homework assignment they’d been given. As soon as Eckert realized that she was alone in the apartment, he took his chance, grabbing her by the throat and throttling her into submission. Then with the girl lying unconscious at his feet, he could finally live out his fantasy, burying his hands and his face in her hair, touching himself, reaching an explosive climax.

With his lust sated, cold reason crashed in on Eckert. He realized the gravity of his situation. Silvia’s father was a policeman and she would almost certainly tell him what had happened. Eckert was in deep trouble, unless…

Employing a criminal cunning that belied his tender years, Eckert decided then and there that he was going to have to kill the girl. Taking a length of clothesline he strangled Silvia. Then he fixed one length of the line to a doorknob and wrapped the other around her neck to make it look like a suicide. Having done that he went back to his apartment where he masturbated to the memory of his vile deed.

Not everyone was convinced that Silvia had killed herself, least of all her father. But the East German authorities were reluctant to admit that a policeman’s daughter had been murdered in her own apartment, so they readily accepted the suicide theory and closed the file on the matter. Volker Eckert had gotten away with his first murder.

Not long after he killed Silvia Unterdorfel, Eckert started working with his father as a house painter. He also began to spend his nights prowling the darkened streets of Plauen, looking for women to attack. Just how many of these attacks he carried out is unknown, but in 1978, he was caught strangling a woman. Charged with sexual assault, he received a paltry sentence of two years and eight months. He was out on parole within a year.

At around this time, both of Eckert’s parents died, within days of each other, and he took on the responsibility of caring for his younger brother and sister. But soon the children were sent to live with an aunt and Eckert was free to resume his nighttime meanderings. Over the next eight years he attacked at least 30 women on the streets of Plauen, leaving them unconscious. There is also evidence to suggest that he committed at least one murder during this time. In April 1987, 18-year-old Heike Wunderlich was found strangled and naked in the woods outside Plauen. Eckert was not a suspect at the time, but the police now believe that he was responsible.

While Eckert may have gotten away with the Wunderlich murder, his next assault left him in serious trouble. An attempted murder charge saw him sentenced to 12 years in prison. That sentence was later reduced on appeal and he walked free in 1994, having served half of his original prison term.

Eckert emerged to a reunified Germany and wasted no time in moving to the west, settling in the town of Hof. In 1999, at the age of 40, Eckert obtained a license to operate a heavy vehicle. Shortly thereafter, he got a job as a long-distance truck driver and began traveling throughout Europe. Eckert could not have hoped for a better vocation. He was about to take his murder show on the road.

On June 21 2001, Eckert was traveling home from a job in Spain, when he picked up 21-year-old Nigerian prostitute, Sandra Osifo, outside the railway station in Bordeaux, France. Within an hour, Osifo was dead. Four days later, her body was found in a ditch 90 km to the north.

Two months later, in August 2001, Eckert picked up Isabel Beatriz Díaz in Lloret de Mar, Spain. Díaz put up a brave fight for her life but in the end Eckert was just too strong. He dumped her body near the motorway junction at Maçanet de la Selva. It was not found for two months.

In August 2002, the body of Benedicta Edwards, a 23-year-old prostitute from Sierra Leone, was found dumped on a footpath near Troyes, France. A year later, in Pilsen, Czech Republic, the naked, strangled corpse of a woman was found beside the motorway. All of these deaths coincided with Volker Eckert working in the area.

And still the murders continued. Ahhiobe Gali, a Ghanaian national was found dead in Italy in September 2004; Mariy Veselova, a Russian, turned up near Gerona, Spain in February 2005; a Polish woman, Agneska Bos, was found in northeast France in October 2006; and in November 2006, Miglena Petrova Rahim, aged 20, from Bulgaria, was found dead, again near Gerona. It was this murder that would lead to Eckert’s apprehension, although the arrest was down to luck, rather than anything that the police did.

On the day that he murdered Rahim, Eckert parked his truck outside a football stadium in northeast Spain. He still had Rahim’s body in the truck. He was waiting for dark before dumping it. As chance would have it, a technician was installing a CCTV camera at a factory adjacent to the stadium. As he focused the camera in, he panned across the stadium parking lot and picked up Eckert’s truck, with the employer’s logo emblazoned across its side.

The following day, the Spanish police found Rahim’s body and in the course of their investigation, requested footage from the newly installed camera. Eckert’s truck was traced to Germany and the Spanish police asked their German colleagues to pick him up.

Eckert was brought in for questioning on November 17, 2006. He denied any knowledge of the body in the parking lot. Then, after just an hour of questioning, he started complaining of a headache and asked if one of the police officers could fetch his medication from his truck. A constable was dispatched to fetch the medicine, but as he was searching for it, he came across three Polaroid pictures depicting apparently dead women, with nooses around their necks. In addition, there was a length of rope and a handwritten journal describing several murders.

Confronted with this evidence, Eckert admitted to killing six women. The police soon discovered that that number was well short of his actual toll. Across Europe - in Spain, Germany, Italy, France and the Czech Republic – at least 50 murders and attempted murders could be connected to Volker Eckert.

Eckert, however, would never stand trial for any of them. On July 1, 2007, while awaiting trial, he hanged himself in his cell. Coincidentally, it was his 48th birthday.

Don’t have a Kindle? No problem. Download Amazon’s free Kindle reader here for PC or Mac
Posted by Robert Keller at 01:46