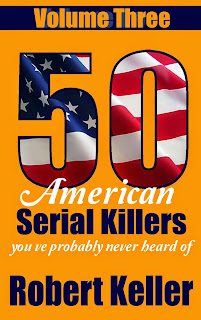 Posted by Robert Keller at 05:58 No comments:

Bundy: Portrait of a Serial Killer 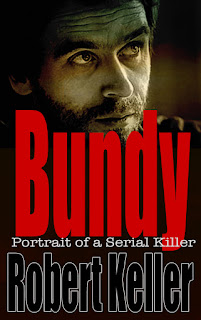 It is a question I am asked often, one that seemingly occupies the mind of just about every true crime reader I meet. Usually it is phrased something like this. “What makes a serial killer? What compels them to kill?”

I have spent many years, decades even, puzzling over that same question. As far as I can tell it is a combination of genetics, environment and experiences, mashed together in countless different ways to produce its monstrous outcome. (I wrote an article on the subject which you can read here, if you’re interested: What Makes a Serial Killer?).

But even these findings, intended to distill my thoughts into a definitive answer, left me unfulfilled. There had to be something more, something I was missing. Gradually, I came to realize what it was. Only a psychopath can truly understand the thoughts and motives of another psychopath. These days, when people ask me “What makes a serial killer?” I tell them to study Ted Bundy.

Theodore Robert Bundy was America’s ultimate bogeyman, the quintessential sex slayer, a demon in the guise of an ordinary man. But this was no hunched gargoyle, wild-eyed and foaming at the mouth to warn us of his bad intentions. This was a handsome, talented and articulate young man, an honors graduate for whom a bright future was predicted. This was a rising star in the Republican Party who might well have achieved his ambition of high political office. (President Bundy has a nice ring to it, don’t you think?)

Except Ted Bundy chose a different path, a path that would lead him into the darkest reaches of the human soul, a place where angels genuinely would fear to tread. He would not make that journey alone, at least 36 young women would make it with him, albeit unwillingly.

What is fascinating about the Bundy story is that there is a clear descent. The road to hell in this case has well-defined markers. Bundy went from being a habitual thief to being a chronic masturbator obsessed with porn. He then started making clumsy attempts at disabling women’s cars. From there it wasn’t a huge leap to stalking Co-Eds through the darkened streets around the University of Washington campus, to peeking into windows, to admitting to himself that his enjoyment at seeing their naked flesh was more than sexual, that his arousal relied on the idea of causing them harm.

That realization frightened him, terrified him so much that he swore off his nocturnal rambles and stayed off the streets for a full three months. But all the while, the tension was building. Like any addiction, this wasn’t one that could be overcome simply by wishing it away.

And so Bundy returned to wandering the alleyways and thoroughfares of his neighborhood, now numbing his senses with alcohol to ward off any prickling of conscience that he might encounter. Then came the night when he picked up a chunk of wood with the express intention of causing harm to the woman he was stalking. And then came the night when he followed through on that intent.

All of these steps happened by small degrees and if Bundy is to be believed, then the “normal Ted” fought the “entity” (as he dubbed his murderous alter-ego) every step of the way. I am not so sure. In fact, I reject categorically Bundy’s assertion that he tried to keep the “entity” in check. Such attempts would have been futile, in any case. Bundy was on a path that had only one destination. Eventually, he was going to cause harm to some unfortunate woman. Serious harm. On January 5, 1974, Bundy entered a student’s apartment and beat her senseless. Less than a month later, he spirited Lynda Ann Healy away into the night.

At first, murder was a matter of expedience, to eliminate the possibility of being caught, as Bundy put it. But Bundy quickly developed a taste for killing. He became obsessed with death. He invented ingenious ways of luring his victims and delighted in the thrill of the hunt. Possession was his aim, and what better way of possessing someone than by taking that person’s life. But Bundy didn’t stop there. He now entered a phase of accelerating depravity.

We know what Bundy did once he had a rapidly cooling corpse at his feet and we know what he did to the decomposing remains in the weeks that followed. We know because Bundy liked to talk. Many of those harrowing details were shared with authors Michaud and Aynesworth, with Dr. Robert Keppel, with FBI Special Agent William Hagmaier. Some are so extreme that the gentlemen in question refuse to divulge them, even to this day.

And so to the question I asked earlier, “What makes a serial killer?” and to the answer I suggested, “study Ted Bundy.” That Bundy was a psychopath is undoubted. That he was possessed of extremely aberrant sexual drives is also true. And yet, if there is any deviant who might have found a way out of the maze, it is he. The tools were all there – an above average intellect, a solid education, powerful contacts, good looks, the love of a beautiful, cultured and wealthy woman. Even these could not assuage the murderous compulsion fermenting in Bundy’s brain. They couldn’t because Bundy didn’t want them to.

In truth, Ted Bundy never stood a chance. His cravings were far too powerful, far too addictive. His was an alien brain, an insect brain. His thought patterns cannot be understood by comparison with those of a normal human being. Although the idea was once derided, many psychiatrists now believe that there are those among us who are born evil. Ted Bundy fits that mold. There is no possibility that he could have become anything other than the monster he became.