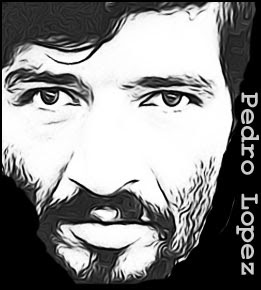 
He was known as the “Monster of the Andes,” and with good reason. A child killer and rapist, Lopez may be responsible for as many as 300 murders.

Born to a Colombian prostitute in 1948, Lopez was one of 13 children. At age eight, he was caught sexually molesting one of his sisters. As a punishment his mother threw him out on the streets, warning him never to return. Survival was tough out there, but the young boy endured by begging and stealing. At age 18, he was arrested for car theft and sent to prison. On his first night inside he was gang raped by four older convicts. Lopez soon got his revenge, killing three of the four attackers. Just two years were added to his sentence.

The murders he'd committed in prison whetted Pedro's appetite for more mayhem. On his release, he began wandering the country searching for victims. His usual tactic was to visit a market town, find a young girl on her own and lure her to an isolated spot with the promise of a gift. There, he'd rape and strangle the child.

Lopez was frighteningly prolific, ranging across Peru, Ecuador and his native Colombia in his constant search for victims. Because his victims were usually poor indigenous girls, the authorities paid scant attention. It was only after flooding unearthed a mass grave containing 53 bodies that they sat up and took notice.

Lopez was eventually arrested in Ecuador on March 9, 1980, after he was caught trying to lure a nine-year-old from a market. In custody, he confessed to his killing spree but the police did not believe him until he started leading them to his burial sites. Tried for the murders of 110 young Ecuadorian girls, Lopez received a paltry 16 year prison term.

He was released from that sentence on August 31, 1994, whereupon he was handed over to the Colombian authorities. They decided that he was insane and confined him to a psychiatric hospital. Lopez was released in 1998 on just $50 bail. He promptly disappeared. No one knows his current whereabouts.