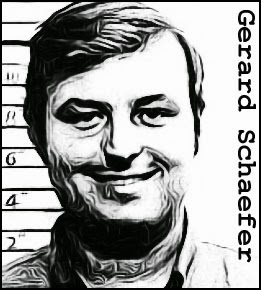 
A sexual deviant from the age of twelve, Gerrard Schaefer went on to become on of America’s most depraved killers. He committed at least nine murders of girls and young women, some of them while he was serving as a Deputy Sheriff.

Schaefer first came to the attention of the authorities in July 1972 after he picked up two teenaged hitchhikers in his police cruiser. The girls were driven to a swamp where they were tied up with nooses around their necks. Shaefer then left them there, balancing on a tree root, in danger of choking to death if they slipped. He probably intended coming back after his shift was over but fortunately the girls managed to escape and reported him to the authorities.

Schaefer was fired from his job, charged with kidnapping and assault, and released on bail. But while he was awaiting trial, two more hitchhikers disappeared in remarkably similar circumstances. These victims were not so lucky. According to the pathologist they’d been “tied to a tree and butchered.”

Given the similarities in the abductions, Schaefer was the obvious suspect. The police obtained a search warrant for his home. There they discovered a trophy stash that marked Schaefer out as a prolific and depraved killer. Included in that evidence were personal items linking Schaefer to seven more murders, some of the victims as young as 14. There was also a journal written as “fiction” in which Shaefer described his sick methods, amply illustrated with his own graphic drawings.

Schaefer would eventually be sentenced to two concurrent life terms. But he only got to serve 12 years of that time. On December 3, 1995, Gerrard Schaefer was knifed to death by fellow inmate Vincent Faustino Rivera.