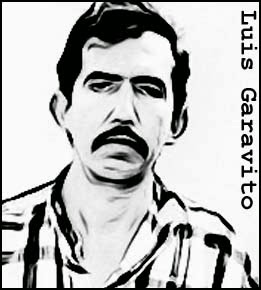 
Known as "La Bestia" ("The Beast") Luis Garavito is arguably the world’s most prolific serial killer. Born in Génova, Colombia on January 25, 1957, he grew up in a large family and suffered suffered severe physical and emotional abuse at the hands of his brutal father. He was also subjected to sexual abuse as a child, eventually growing up to become an abuser himself.

Garavito preyed on peasant children and street urchins, mainly boys, mostly between the ages of 6 and 12. His tried and tested M.O. was to approach them on the streets and offer them gifts or small amounts of money in exchange for performing some menial task. Having gained the boy’s trust, Garavito would lure him to some secluded spot where he’d overpower the child and tie him up. Garavito would then take his time, raping and torturing him. Eventually he’d dispatch the unfortunate victim by cutting his throat.

Although Garavito was an itinerant serial killer, always on the move, his massive death toll did not escape the notice of the police, especially after they discovered several mass graves. They initially suspected organ harvesters or Satanic cults, but eventually focused in on Garavito after his name was found in the registries of cheap hotels in several towns where murders had been committed. Garavito was arrested on April 22, 1999, when he was spotted trying to drag a boy into some bushes. In captivity he confessed to 140 murders. He is suspected of killing at least 170 more children in 59 towns across Colombia and Ecuador.

Garaviro was eventually found guilty of 138 murders and sentenced to 1,853 years in prison. However, Colombian law stipulates that no prisoner may serve more than 30 years and Garavto received a further reduction because he co-operated with the authorities in finding the bodies. Amazingly, the killer of over 200 children will serve just 22 years in prison.