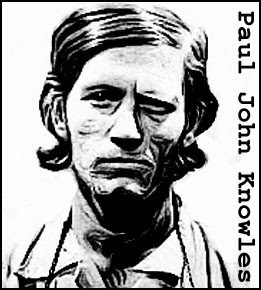 Born in Florida in 1946, Knowles was a habitual criminal who served his first jail term at age nineteen. In 1974, while serving yet another period of incarceration, he began corresponding with a wealthy young woman named Angela Covic. Covic believed Knowles' claims of innocence and hired a lawyer to secure his early release. The couple planned to marry, but Covic became afraid of Knowles and ended the relationship. That rejection appears to have pushed Knowles over the edge.

Knowles first victim was 65-year-old Jacksonville, Florida resident Alice Cooper, although the death may have been accidental. He bound and gagged Mrs. Cooper in order to steal her car.  She choked to death on the gag.

In August 1974, Knowles abducted sisters Lillian and Mylette Anderson, aged just eleven and seven respectively. The girls were strangled and dumped in a  swamp. Thereafter, Knowles hit the road, traveling across Florida, Georgia, Alabama and several other states, ranging as far west as Nevada. Anyone who crossed his path he murdered. When he needed money, clothes or a vehicle, he simply broke into a home and killed the occupants. Hitchhikers who he offered a ride to ended up raped and killed. He even kidnapped and executed a Georgia State Trooper.

Knowles killing spree eventually came to an end on December 17, 1974 when he tried to break through a police roadblock and crashed his vehicle into a tree. Fleeing on foot he was later apprehended by a civilian with a shotgun.

Had Knowles been brought to trial, he would almost certainly have received the death penalty. However, he'd never see the inside of a courtroom. On December 18, 1974, while being transferred to a maximum security facility, he managed to get free of his cuffs and made a grab for an FBI agent’s gun. Agent Ronnie Angel shot Knowles three times in the chest, killing him instantly.