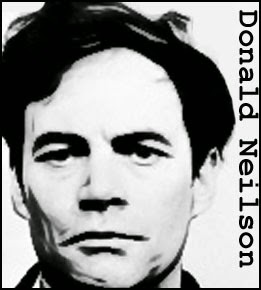 
There was little in Donald Neilson’s early life to suggest the killer he would become. His childhood appeared relatively normal, he graduated school and served in the British army, he married and fathered a child, he made a respectable living as a self-employed builder. But after Neilson’s business failed, he became morose and angry at the world. Unable to find other employment, he turned to crime, committing over 400 burglaries in eight years.

Neilson’s favorite targets were post offices, but the problem was that the postmasters often stayed on the premises, increasing his chances of being caught. To counteract this threat, he carried a shotgun with him during his break-ins. On February 15, 1974, sub-postmaster Donald Skepper interrupted Neilson during a robbery and was gunned down. During the next year he shot to death two more postal employees and brutally bludgeoned another.

But Neilson was unhappy with his meager take from these robberies. He wanted a big score and decided on a kidnapping. The target was 17-year-old heiress Leslie Whittle. Neilsen snatched the girl on January 14, 1975. He hid her in a drainage pipe with a wire noose around her neck to prevent her escaping, then demanded £50, 000 from her parents. Unfortunately, Leslie choked to death on the noose before the ransom could be paid.

The murder of Leslie Whittle made Neilson the most wanted man in Britain, but he still had time to commit one more murder, gunning down security guard, Gerald Smith, before he was eventually captured on December 11, 1975. Tried and found guilty, Neilson drew a life term without parole.